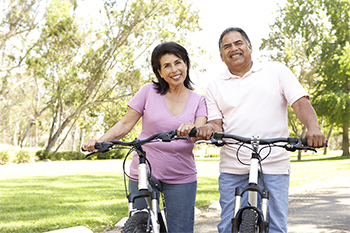 Their Goals and Concerns:

In our early meetings we spent time talking about them- where they’d been, how they were feeling about things now, and what their goals and dreams were for the future. They met when Carlos was in grad. school and Carla was starting out in social work. Carlos had spent a little time following his post-doc working in the pharma industry but has since been in academia, reaching full professor. On the whole, they are like a lot of later middle-age couples. They’re nearing the end of the child-rearing years but now face the possibility of parent-care years. They are very much engaged in their careers, and both feel valued. Neither is looking to get out right away, but they are starting to envision something different. Their biggest concern is whether they are on track to be financially OK in retirement and what could derail them.

As we talked Carlos started to share some of his ideas and interests. While he envied some friends from school who made it big as part of start-up companies, he felt that probably wasn’t for him. And besides, what he wanted was to teach more. He wasn’t exactly sure what he wanted to do but it was a nagging urge that wouldn’t go away. Carla was good with all this because she couldn’t figure out what he’d do if he just “retired” (drive her nuts was one stated possibility). Carla on the other hand was happy as is. She taught a couple of courses and collaborated on some research on the side too. She wasn’t interested in stopping any of this cold-turkey. She was active in a few social groups and served on the board of a local non-profit group which brought her a great deal of satisfaction. She even surprised herself some with thoughts of grandchildren someday- and her last child wasn’t even out of the house yet.

As is often the case with folks who haven’t paid a lot of attention to their finances, their actual financial situation wasn’t all that clear. They knew what they earned. He had always contributed to his retirement plans and had a trail of TIAA accounts. She had several retirement accounts from past employers too. Other things weren’t so clear. For instance: how much are they spending and where; what do they owe (mortgage, some school loans from CJ); what about pensions and Social Security? It was important they see what they had accomplished so far. As it turned out they had done better than they thought. Those years of just putting money into accounts had yielded some decent results. “Dumb luck” they said. There was probably more to it than that. But they still had Mary and Tony to get through college and they wanted to pay off the house if at all possible.